With the imprisonment of Karl Friedrich Stellbrink, the Luther congregation is without a pastor of its own and is provisioned for in a poor way by other Lübeck clergymen. The Stellbrink family is allowed to stay in the parsonage but must remain silent about the fate of the father and husband.
After the war there are two new pastors: The clergymen Gerhard Gülzow and Georg Pautzke came to Lübeck as refugees from the East — as did many new church members. The parish council of the Luther congregation, however, continues to exist in the same form as it did during the Nazi period. A critical examination of the past and the fate of pastor Stellbrink only takes place at a regional church level. The people in the district and in the congregation have to cope with the daily struggle for survival.

In the Sacred Heart of Jesus congregation, on the other hand, the honourable remembrance of the executed has been of great importance from the very beginning. The fact that together with the clergy 18 laities of the Catholic community had been imprisoned certainly had a large share in this. Masses are regularly celebrated at the hour of death on 10 November. The memory of the Protestant pastor Stellbrink is part of the commemoration, and his family is invited to events.
In the Luther Church, there are smaller commemorations in the 1950s and 1960s to mark the anniversary of his death, which are often linked to the commemoration of Luther’s birthday on
10 November. 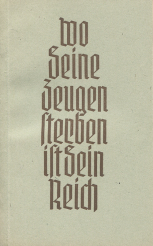 The Jesuit Joseph Schäfer, who had come to the Sacred Heart Church in 1943 as vicar, published already in 1945 the small brochure “Where His witnesses die is His kingdom” about life and martyrdom of the four clergymen.

In 1946 a more extensive book appeared under the same title, of which several thousand copies were sold throughout Germany. 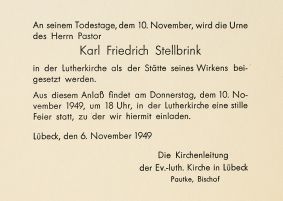 Invitation to the commemoration of Karl Friedrich Stellbrink by the Lübeck regional church, but not by the Luther congregation.

The initiative to transfer the urn of the murdered clergyman from the Ohlsdorf cemetery in Hamburg to the Luther Church originated from his family after Stellbrink’s son Gerhard had returned from captivity. 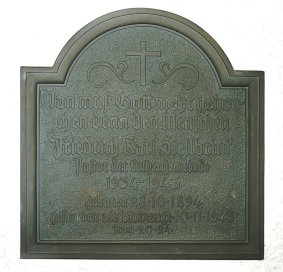 One must obey God more than man.

The gravestone on the urn of Karl Friedrich Stellbrink bears the inscription “One must obey God more than man”.