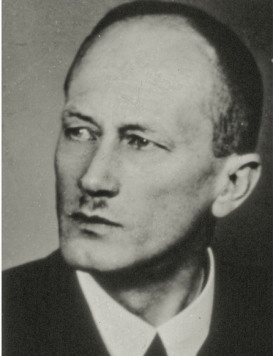 Karl Friedrich Stellbrink was born in Münster in 1894. He was a soldier in World War I and returned from the war wounded in 1917. He trained as an overseas pastor and lived in Brazil with his family for seven years. In 1929 he returned to Germany. He was no friend of the young Weimar Republic and clung to nationalistic ideals.

In 1933 he joined the NSDAP. Because of his political beliefs, he became the main pastor of the Luther congregation in 1934, where people of similar thinking were in charge at that time.

In the following years, he did an inner about-face. More and more he recognised the immoral and anticlerical attitude of the NSDAP and was excluded from the party in 1937 because of repeated criticism. In the subsequent years, his sermons caused the Gestapo to issue warnings. At the latest in 1939, the pastor had become not only a critic but also an opponent of the regime. He found like-minded people in the three Catholic chaplains with whom he had been exchanging ideas since the summer of 1941 regardless of the high denominational boundaries of the time. The four clergymen copied and distributed writings critical of the regime.

His sermon on Palm Sunday 1942 was the trigger for his arrest a few days later. The Lübeck regional church was under National Socialist leadership during the Nazi era and immediately suspended the imprisoned clergyman from his office. Stellbrink’s family suffered with him in the period leading up to his execution on 10 November 1943, as is touchingly testified in the prison letters preserved to posterity. During his imprisonment, the friendship with the three chaplains grew. Stellbrink shared death row with Hermann Lange. “We are like brothers,” is how Lange described the intimate relationship between the clergymen.

In the Lübeck regional church, Stellbrink’s assessment remained ambivalent even after 1945 — the reasons for this were both his considerable theological deviations and his originally positive attitude towards National Socialism. Among the Lübeck pastors, he had been an outsider. Only in 1993, on the 50th anniversary of the execution, Karl Friedrich Stellbrink was rehabilitated by the Protestant Church due to the initiative of the then Bishop Kohlwage.