When pastor Ulrich Burgstaller accepts the position of Senator in spring 1933, he recommends his friend, the theologist Gerhard Meyer, as his successor. Like Burgstaller and Stellbrink, he is also a member of the German Church Federation.

Despite his office at the Luther congregation, pastor Meyer often travels elsewhere in Schleswig-Holstein and Mecklenburg and spreads propaganda for the German Church Federation, which rejects the Old Testament and parts of the New Testament. In Itzehoe and Flensburg, he teaches confirmation classes at the request of local Christians.

With Stellbrink’s increasingly critical attitude, the differences of opinion between the two pastors of the Luther congregation grow.

When the war starts in 1939, Gerhard Meyer volunteers. A few weeks later he dies as a soldier in the attack on Poland. At this time pastor Stellbrink has already become an opponent of the Nazi regime. He describes the “heroic death” of his colleague as senseless towards church members. 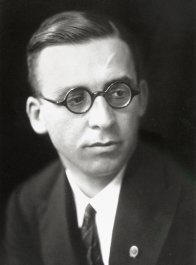 Pastor Meyer with party badge. Born in Lübeck in 1907, the pastor had already joined the SA and the NSDAP in 1929 during his studies in Kiel.

In 1933 he became pastor at the Luther congregation.