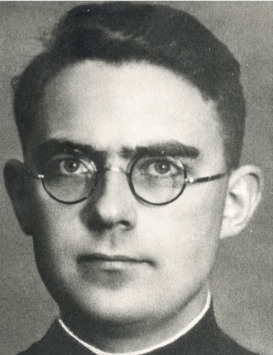 Hermann Lange was born into a middle-class family in Leer in East Frisia in 1912.

Hermann spent most of his youth in Leer, where he attended first the Catholic primary school and then the public grammar school. He passed his Abitur in 1933.

On the way to the priesthood
At that time, the desire to become a priest had long been clear to him. His godfather, a brother of his father, was a pastor in Bremen and later the dean of the cathedral in Osnabrück. Even as a grammar school student, Hermann Lange was active in the Catholic youth movement. He was a member of the Kolping Society and the “Federation of New Germany”. Among other things, he went on trips and to camps with Bible study and devotional services. Hermann Lange was an altar boy in his home parish, became a group leader and was popular with the young people.

In 1933 he began his study of theology at the University of Münster, which he finished in 1937 in order to enter the seminary in Osnabrück. In 1938 he was ordained a priest in the cathedral of Osnabrück and on Boxing Day of the same year he celebrated his first Mass at St. Michael’s Church in Leer with great participation of the congregation.

As chaplain in Lübeck
For only a few weeks at a time, the young priest Lange was assigned to two congregations of the diocese of Osnabrück, before he came to Lübeck as vicar to the Sacred Heart of Jesus congregation on 1 June 1939.

Hermann Lange had been a systematically and thoroughly thinking student. In the same way, he prepared his sermons in written form in every detail and introduced his listeners thoroughly to his trains of thought. His involvement with politics was primarily limited to those areas that penetrated church life and worldview. However, he then took a clear position and did not avoid even uncomfortable conclusions. He recognised the war as incompatible with the Christian faith.

With a clear mind against National Socialism
In the meantime, Hermann Lange had already heard of several clergymen from his former circle who had come into conflict with the National Socialists. Pastor Franz Moschner, a friend of his uncle, had been sentenced to two months in prison for an article in the Catholic magazine “Ansgarius”. In it, Moschner had compared the Nazi chief ideologist Alfred Rosenberg with a scarab, a beetle that feeds on dung. Lange distributed this article to other readers, for example to pastor Stellbrink.

Lange also heard that the priest of his home parish in Leer, Heinrich Schniers, was repeatedly observed by the Gestapo and finally taken into preventive arrest. Pastor Schniers died in the Dachau concentration camp in August 1942.

Although Hermann Lange did not immediately see himself as hostile to the state, he must have been aware that his open attitude and the distribution of critical writings put himself in great danger.