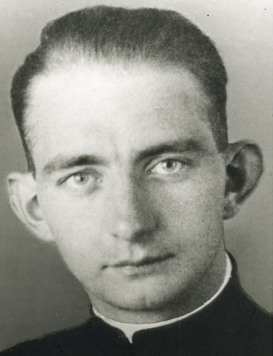 Johannes Prassek was born in Hamburg in 1911. He came from ordinary circumstances.

Early on Prassek was inspired by the thought of becoming a priest. Since he came from a humble background, he needed support also from outside the family. He attended a Catholic elementary school and was accepted into Catholic grammar school because of his intellectual vigilance. The pastors of Rahlstedt supported him in his development as well as the missionary sisters there. He was able to finance his studies in Frankfurt and Münster with the help of several private loans, for which his mother was also very engaged. In 1935 he finally moved into the seminary in Osnabrück.

First experiences as a priest
After his ordination in 1937, Prassek began his first position in Wittenburg/Mecklenburg. There he found very simple working conditions in the Diaspora. With his down-to-earth, warm and at the same time charismatic appearance he won many sympathies. When he had to leave his position after one year due to illness, a church member wrote to the responsible Bishop Berning: “Give us back our chaplain, popular with the Catholics and the Lutherans. Let us catch up with him with flags and wreaths with garlands, he was a man who pleased god.

Upright and veracious
He has always been an independent thinking and upright person. In discussion circles, religion classes and sermons he did not keep quiet about naming grievances and injustices. He was warned several times that he would have to restrain himself if he did not want to get into trouble with the Gestapo. He is said to have replied: “Who else should tell the truth, if not the priests?” After Prassek had met pastor Stellbrink in summer 1941, the two men became friends. Prassek introduced the Protestant somewhat to the Catholic diaspora of Lübeck.

At the same time, Johannes Prassek was also a determined and hands-on person. During the air raid on Lübeck at the end of March 1942, he was an imperturbable helper in the fight against the fire.