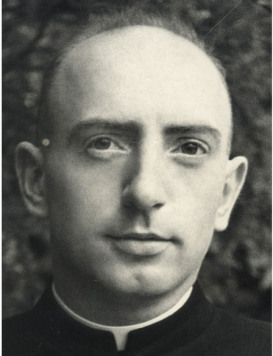 Eduard Müller, who was born into a child-rich and poor family in Neumünster in 1911, had a difficult path to become a priest. First, he apprenticed as a carpenter. “For a long time I believed that my wish to become a priest could not be realised because of the financial circumstances of our family,” Müller later wrote.

He took the path to the Abitur in second-chance education. The school fees and housing allowances were raised by people from Eduard’s home parish in Neumünster who wanted to support him. This was often just barely enough, and the hardworking student suffered greatly from his poverty. Yet his clear objective did not cause him to despair.

Loving to travel in Europe
After Eduard Müller had finished his Abitur in March 1935, he began studying theology in Münster in April. During this time, he went on long journeys with young men of the local Catholic congregational youth, which took him all over Germany, to Italy, Yugoslavia and finally to Syria. He documented his travels with a camera.

The priest Eduard Müller
In 1940 he was ordained priest in the cathedral of Osnabrück. Afterwards, he began his practical training as a priest at the Sacred Heart Church in Lübeck. Friendly and in a non-authoritarian way he arranged the youth work there.

His family background, his manual skills and his own experience with poverty led him to emphasise quite easily with people who lived in simple circumstances and he understood their problems without much explanation. Because of his pronounced pedagogical talent, the National Socialists tried to poach him for tasks in the Hitler Youth, which Müller rejected.

He regarded himself as “rather apolitical”. But the life practice of the gentle clergyman did not fit into the era of strict discipline and order. Like his colleagues Johannes Prassek and Hermann Lange, he also participated in the reproduction and distribution of writings critical of the regime and allowed open discussion at his group meetings.